The Syrian Crisis Facts and Figures on The Humanitarian Situation The Syrian crisis, nearing the end of its 11th year, continues to be one of the largest refugee crises the modern world has faced in recent times. Since the official beginning of the conflict on March 15, 2011, the Syrian people have suffered tremendously in a war that resulted in the loss of many thousands of lives due to conflict-related consequences. More than 80% of Syrians live in extreme poverty, on less than $1.90 a day. One can clearly identify the very rapid pace at which the Syrian nation seems to be unraveling at the seams. 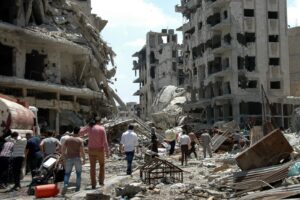 To gauge the large-scale devastation that has hit the country, one need only look at the numbers. With more than 6.8 million Syrian refugees and asylum-seekers, an additional 6.7 million people are also displaced inside the country itself. Totaling to about 13.5 million people, one can see the sad reality of more than half the country’s population being forcefully displaced. Out of this huge number, it has been estimated that nearly 11.2 million Syrian nationals need humanitarian help. It’s heartbreaking to also note that about half of the population worst hit by the refugee crisis are children. 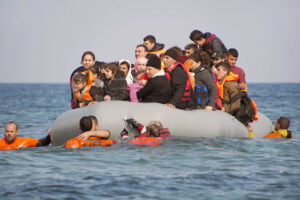 The continued conflict only further exasperates the economic desperation that the country is undergoing. There has been a steady 78% drop in the value of the Syrian currency since October 2019. Fluctuations in fuel prices contribute to the rise in food prices. According to data collected by the HSOH, 85% of households of the assessed communities cannot afford essential food items. Likewise, the high price of formulas suitable for babies and young children (less than two years old) was reported in 88% of assessed communities. Indeed, data collected on food insecurity within the last year has shown that it has reached a historic high with 60% of the population now facing food insecurity. The rising prices of food are now at a level 236% higher than they were in December of 2019. 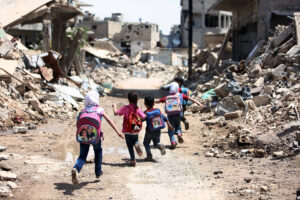 Barrett Alexander, World Vision senior policy advisor, says: “On top of the strain on families’ ability to secure basic food rations and household items, the economic impact of the conflict continues to drive serious child protection concerns, including negative impacts on education. Parents are forced to remove children from school due to the inability to pay fees, and teachers are not receiving their salaries… Many girls who drop out of school are severely impacted by child marriage.” It seems over 2.4 million children are not in school, with nearly 40% of them being girls.

Within the past year, a country already in turmoil was dealt yet another bad beat – the Covid 19 pandemic. The latest HSOH (Humanitarian Situation Overview in Syria October 2021) shows data that from the beginning of the COVID-19 pandemic to October 31, 2021, 166,848 cases of COVID-19, including 5,726 deaths, have been confirmed across the whole of Syria. 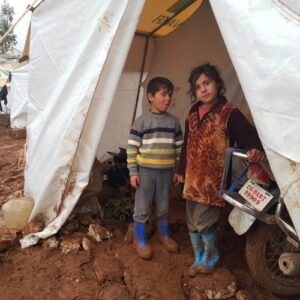 There are sure to be more that were unreported. As of October 10, around 140,000 persons in NWS received a vaccine dose through the COVAX campaign. Yet, less than 35,000 persons were fully vaccinated. With only 58% of hospitals and 53% of primary health care centers fully functional, overcrowding of health facilities has also been cited as a barrier to accessing healthcare in 53% of the assessed communities (HSOH).

It has been recorded that 1.1 million Syrian refugees and displaced people in Syria were driven further into poverty as a result of the pandemic, according to a December 2020 report by the World Bank Group and the U.N. Refugee Agency. COVID-19 preventive measures disrupted access to education, too. Due to the spread of COVID-19, schools were reportedly closed by local authorities, and classes were reduced in 81% and 13% of assessed communities, respectively. In only 9 of 371 assessed communities (2%) children were reportedly able to access in-person education without interruptions.

So, one would wonder, where can the Syrians go to for refuge in this refugee crisis? During the peak of the European migration crisis in 2015, some 1.3 million Syrians requested asylum in Europe. Since then, the number of new asylum-seekers has declined significantly. The United States admitted 18,000 Syrian refugees between October 2011 and December 31, 2016.

After all the tears and bloodshed, one can only hope for the sake of all Syrians involved that the light at the end of the tunnel is near. Sunrise-USA is working toward this hope for a better future, by distributing food and necessities to Syrian refugees and displaced persons, supporting education improvement initiatives, and providing assistance to refugees struggling to rebuild their lives. We invite you to join us by making a donation to help Syrian refugees today.